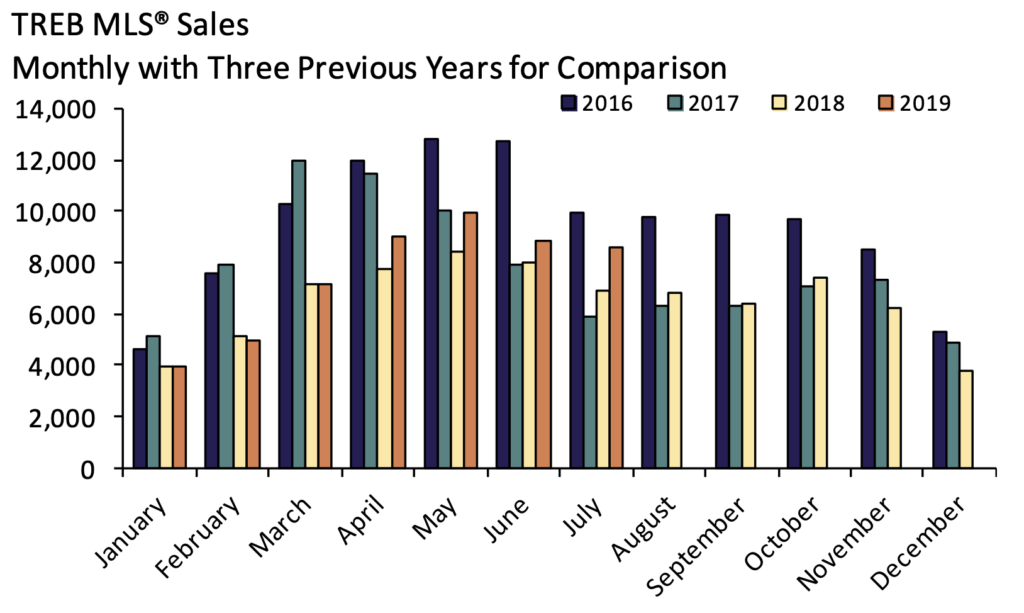 TORONTO, August 6, 2019 – Toronto Real Estate Board President Michael Collins announced that Greater Toronto Area REALTORS® reported 8,595 sales through TREB’s MLS® System in July 2019. This result was up by 24.3 per cent compared to July 2018. On a month-over-month basis, sales were up by 5.1 per cent, after preliminary seasonal adjustment. New listings entered into TREB’s MLS® System in July 2019 were up compared to July 2018, but by a much lesser annual rate than sales, at 3.7 per cent. With annual growth in sales far outstripping annual growth in new listings, market conditions clearly tightened compared to last year. Active listings at the end of July were down by 9.1 per cent year-over-year, further reflecting tightening market conditions. “While the OSFI mortgage stress test has clearly had an impact on the number of home sales over the last year-and-a-half, for most GTA residents the goal of home ownership has not diminished. In fact, we’re seeing growing pent-up demand for ownership housing, especially as the number of GTA households continues to increase by 40,000 to 50,000 each year due to strong population growth. As more and more households come to terms with the stress test and move back into the market in the coming months and years, they could suffer from a chronically under-supplied marketplace and an acceleration of home price growth to unsustainable levels. 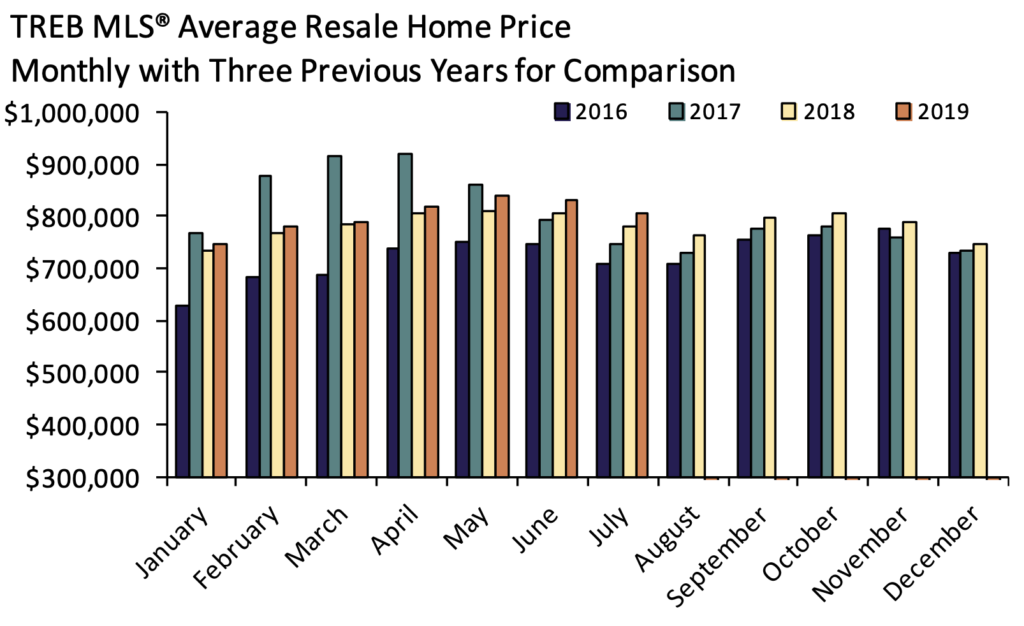 Fortunately, policy makers have acknowledged the housing supply issue and are working toward solutions,” said TREB CEO John DiMichele. “On the housing supply issue, it has certainly been encouraging to see both the City of Toronto and the Ontario Government working on solutions to bring more supply on-line. Based on Mayor John Tory’s motion, Toronto City Council gave City staff a strong mandate to report back on how to develop a greater diversity of housing options in traditional single-family neighbourhoods, including timelines. Similarly, we’ve seen the Provincial Government launch consultations to spur on, and speed up, the development of different forms of housing in conjunction with their ‘More Homes, More Choice’ Plan. TREB looks forward to working with the City and the Province to turn their initiatives into reality,” said TREB President Michael Collins. As market conditions continued to tighten in July, the average selling price increased by 3.2 per cent on a year-over-year basis to $806,755. The MLS® Home Price Index Composite benchmark was up by 4.4 per cent. Higher density home types continued to drive price growth, whereas detached home prices remained down in many communities throughout the GTA. “Broadly speaking, increased competition between buyers for available properties has resulted in relatively strong price growth above the rate of inflation for semi-detached houses, townhouses and condominium apartments. However, the single-detached market segment, which has arguably been impacted most by the OSFI stress test, has experienced a slower pace of price growth, with average detached prices remaining lower than last year’s levels in some parts of the GTA,” said Jason Mercer, TREB’s Chief Market Analyst.