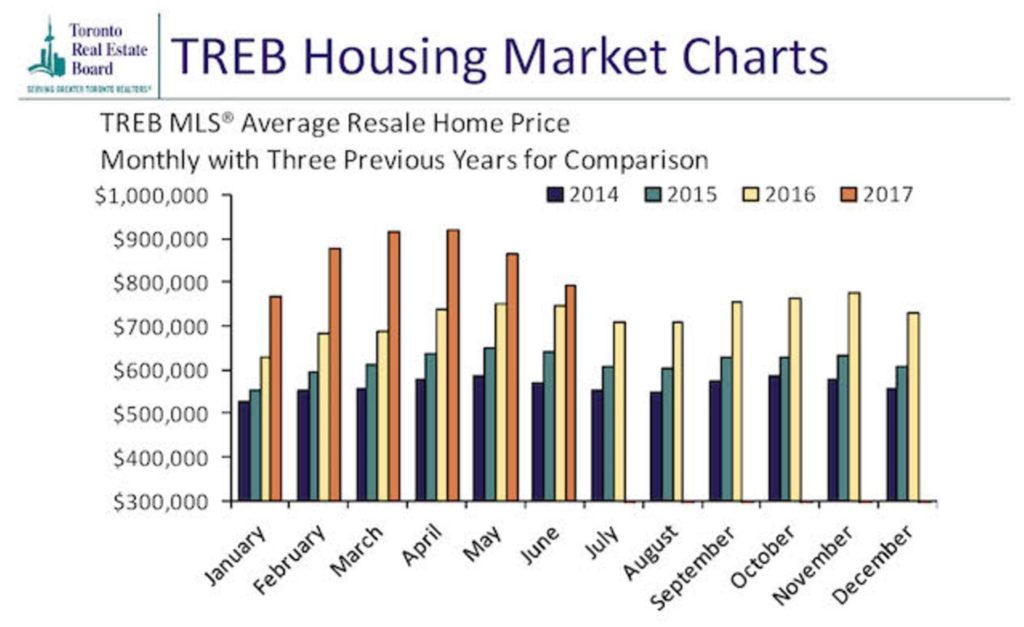 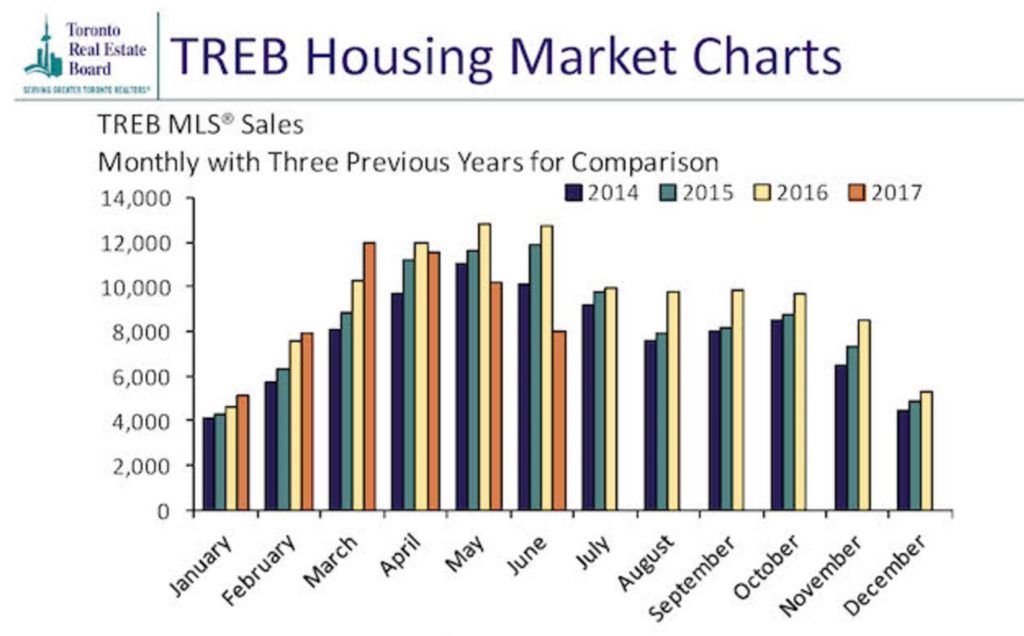 growth was sizeable, it represented a more moderate annual rate of growth compared to May 2017, when new listings were up by 48.9 per cent year-over-year.

“We are in a period of flux that often follows major government policy announcements pointed at the housing market.  On one hand, consumer survey results tell us many households are very interested in purchasing a home in the near future, but some of these would-be buyers seem to be temporarily on the sidelines waiting to see the real impact of the Ontario Fair Housing Plan.  On the other hand, we have existing home owners who are listing their home because they feel price growth may have peaked.  The end result has been a better supplied market and a moderating annual pace of price growth,” said Mr. Syrianos.

Following the announcement of the Ontario Fair Housing Plan, TREB commissioned Ipsos Public Affairs to undertake two consumer surveys: one focused on home buyers; the other focused on home sellers.

Highlights from these two surveys, conducted from May 23-29, are as follows:

“The recent Ipsos survey results suggest that home buying activity in the GTA will remain strong moving forward.  The year-over-year dip in home sales we have experienced over the last two months seem to be the result of would-be buyers putting their decision to purchase temporarily on hold while they monitor the impact of the Fair Housing Plan.  On the supply side of the market, it certainly looks as though buyers will benefit from more choice in the second half of 2017 compared to the same period in 2016,”said Jason Mercer, TREB’s Director of Market Analysis and Service Channels.

The Ontario Fair Housing Plan has prompted some households to put their decision to purchase a home on hold, at least in the short-term.  This includes would-be first-time buyers, who have more flexibility, allowing them to take a wait and see approach.  However, the recent Ipsos survey results dealing with likely home buyers suggest that many households who have moved to the sidelines will return to the market over the next year, possibly after reassessing the type and/or location of home they plan to purchase.

“The Ontario government recently released their first wave of foreign buyer statistics, which confirmed earlier TREB research that showed foreign buyers, even in the pre-Fair Housing Plan era, represented a very small proportion of overall home purchases – slightly less than five per cent.  This, taken along with the strong buyer intentions reported by Ipsos, suggests that we will see many households moving back into the home ownership market over the next 12 months,” said TREB CEO John DiMichele.

“It remains to be seen whether the level of inventory will hold up to accommodate the eventual resurgence in demand.  The Fair Housing Plan was less precise as it related to long term housing supply issues.  Moving forward, TREB looks forward to working with the Ontario government in the development of effective, evidence-based policies pointed at the housing market,” continued DiMichele.

While the impact of the Fair Housing Plan may be temporary as it relates to home sales, it is important to note that the probability of higher borrowing costs over the next 12 months has increased.  The consensus view is that the Bank of Canada will raise its Target for the Overnight Rate at least once in the second half of 2017 and perhaps more than once.  Prospective Bank of Canada increases have already been priced reflected in Government of Canada bond yields and posted mortgage rates, at least to some degree.  Advertised discounted mortgage rates, however, remain at or near historic lows.

Taking into account both the temporary impact of the Fair Housing Plan and the further impact of higher borrowing costs, TREB’s forecast range for home sales through its MLS® System in 2017 has been revised downward to between 89,000 to 100,000 transactions.

While home sales for calendar year 2017 will be down, listing activity will be up.  As home owners react to strong equity gains over the past year, plus feelings that price growth will moderate in the future, new listings entered into TREB’s MLS® System are expected to increase year-over-year.  Look for the total number of new residential listings to range between 175,000 and 190,000 this year.

More balanced market conditions, with sales accounting for a smaller percentage of listings in the second half of 2017 compared to the first half, and particularly the first quarter.  The overall growth rate for the average selling price in 2017 will be between 13 per cent and 18 per cent.  While an annual rate of growth in this range will still be very strong from a historic perspective, it is important to note that it will also represent a moderation in year-over-year average price growth in the second half of the year.  This moderation will be due to both more balanced market conditions and a change in the mix of homes purchased, with a greater share of purchases accounted for by townhouses and condominium apartments.