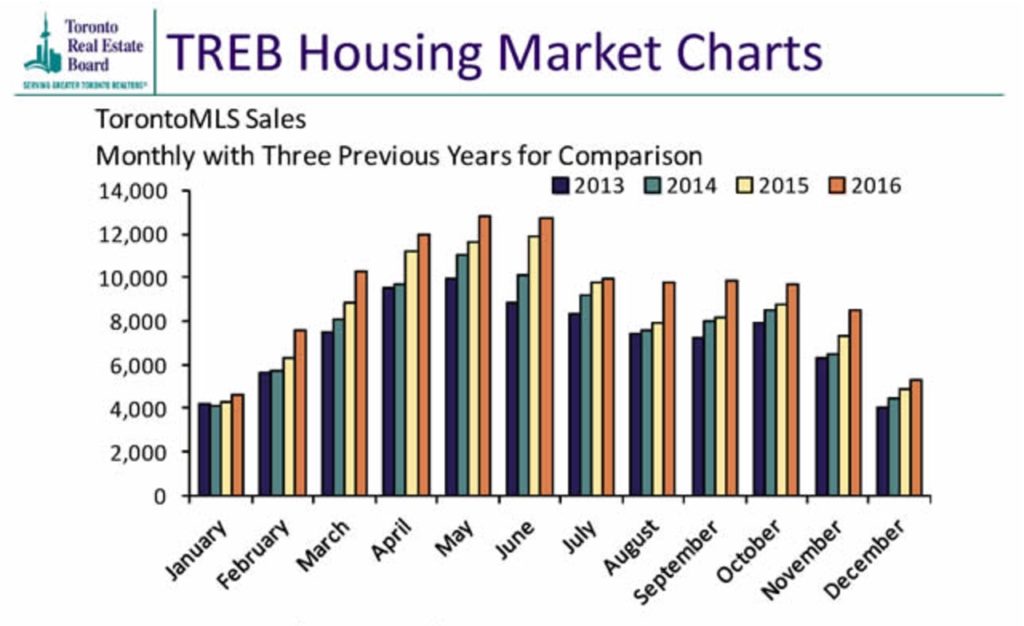 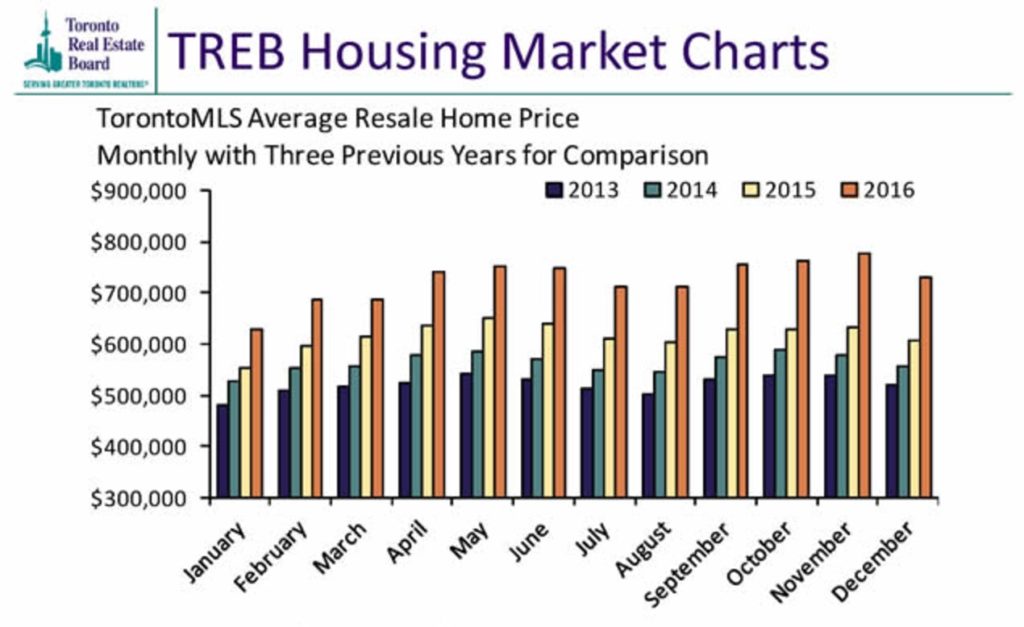 The strongest annual rate of sales growth in 2016 was experienced for condominium apartments followed by detached homes.

“A relatively strong regional economy, low unemployment and very low borrowing costs kept the demand for ownership housing strong in the GTA, as the region’s population continued to grow in 2016,” said Mr. Cerqua.

“It is important to point out that the strong demand that we experienced in 2016 was very much domestic in nature.  TREB recently commissioned Ipsos to survey its Members with regard to the level and type of foreign buying activity within the Greater Toronto Area.  The results of the Ipsos survey suggest that the level of foreign buying activity is low in the GTA.  Only an estimated 4.9 per cent of GTA transactions, in which TREB Members acted on behalf of a buyer, involved a foreign purchaser.  In the City of Toronto, the share of foreign buyers was five per cent,” continued Mr. Cerqua.

The methodology of the Ipsos research involved an online survey of the TREB Membership hosted on the Ipsos platform. A total of 3,518 surveys were completed between October 6 and October 21, 2016. The margin of error is ±2 percentage points 19 times out of 20. TREB will be releasing the full results of the Ipsos survey dealing with foreign buyers on January 31, 2017, in conjunction with its Market Year in Review and Outlook Report and related media event.

The annual rate of growth for the MLS® Home Price Index (HPI) in the TREB market area accelerated throughout 2016 – from 10.7 per cent in January 2016 to 21 per cent in December 2016.  The overall average selling price for calendar year 2016 was $729,922 – up 17.3 per cent compared to 2015.  The pace of the annual rate of growth for the average selling price also picked up throughout the year, including a climb of 20 per cent in December.

“Price growth accelerated throughout 2016 as the supply of listings remained very constrained.  Active listings at the end of December were at their lowest point in a decade-and-a-half.  Total new listings for 2016 were down by almost four per cent.  In 2016, we saw policy changes and policy debates pointed at the demand side of the market.  If we want to see a sustained moderation in the pace of price growth, what we really need is more policy focus on issues impacting the lack of homes available for sale,” said Jason Mercer, TREB’s Director of Market Analysis.

TREB’s Market Year in Review and Outlook Report and media event will include an expert panel and related submissions on the foundations of the housing supply issue in the GTA and possible solutions.

With continued strong rates of price growth, housing affordability is a growing concern.  Unfortunately, the City of Toronto’s Budget Committee is considering an increase to the Land Transfer Tax that could see buyers of average-priced homes pay another $750 to the City, which would represent a seven per cent increase to the $11,000 that they already pay City Hall as an upfront Land Transfer Tax closing cost.  This would be on top of the $12,000 that is also paid to the province.  First-time buyers could end up paying $475 more, or, at best, be no better off, even though the province recently doubled their first time buyer LTT rebate.

“The last thing people need is to dish out another $750, on top of the $11,000 that they already pay City Hall.  The City should be looking for ways to make housing affordability better, not worse, especially for first-time buyers who could go backwards, or at best, be no better off,” said Mr. Cerqua.  “The Budget Committee should stop this proposal in its tracks and instead enhance the rebate for first-time buyers.”