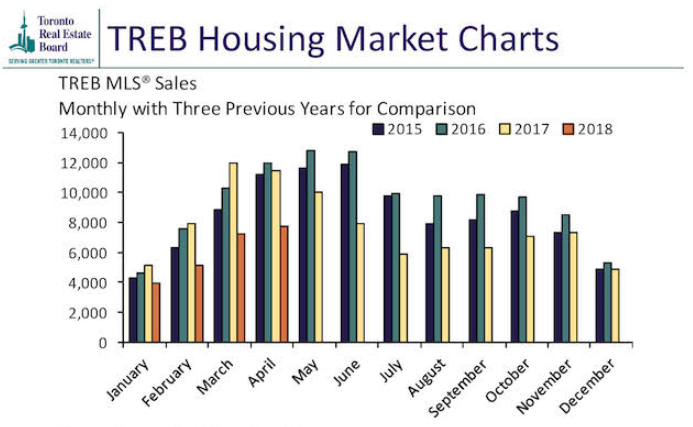 The year-over-year change in the overall average selling price has been impacted by both changes in market conditions as well as changes in the type and price point of homes being purchased.  This is especially clear at the higher end of the market.  Detached home sales for $2 million or more accounted for 5.5 per cent of total detached sales in April 2018, versus 10 per cent in April 2017.  The MLS® Home Price Index strips out the impact of changes in the mix of home sales from one year to the next.  This is why the MLS® HPI Composite Benchmark was down by only 5.2 per cent year-over-year versus 12.4 per cent for the average price.

“While average selling prices have not climbed back to last year’s record peak, April’s price level represents a substantial gain over the past decade. Recent polling conducted for TREB by Ipsos tells us that the great majority of buyers are purchasing a home within which to live. This means these buyers are treating home ownership as a long-term investment. A strong and diverse labour market and continued population growth based on immigration should continue to underpin long-term home price appreciation,” said Mr. Syrianos.

After preliminary seasonal adjustment1, the month-over-month change (i.e. March 2018 to April 2018) in sales and the average selling price was minimal, with sales decreasing 1.6 per cent and the average selling price decreasing by 0.2 per cent.  The month-over-month sales trend has flattened out over the past two months following a steeper drop-off in January and February. 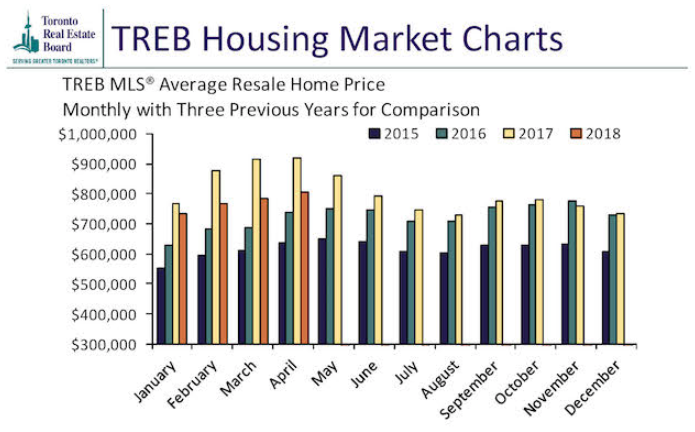 “The comparison of this year’s sales and price figures to last year’s record peak masks the fact that market conditions should support moderate increases in home prices as we move through the second half of the year, particularly for condominium apartments and higher density low-rise home types.  Once we are past the current policy-based volatility, home owners should expect to see the resumption of a moderate and sustained pace of price growth in line with a strong local economy and steady population growth,” said Jason Mercer, TREB’s Director of Market Analysis.

With a provincial election campaign about to begin, GTA REALTORS® hope that all of the provincial parties will make housing issues a priority. Home ownership is a worthwhile investment that benefits our economy, individual finances and quality of life,” said Mr. Syrianos

“In recent months and years, there has been significant intervention in housing markets by all levels of government, through regulatory changes and taxation. We believe the next step should be tax relief, especially from Land Transfer Taxes, both provincial and the Toronto Land Transfer Tax, and efforts to facilitate an increase in the supply of missing middle housing that fills the gap between single family homes and high rises. Furthermore, we believe that any attempt to increase the Toronto Land Transfer Tax should require approval from the provincial government, given the significance of Toronto’s economy to the Province and the connections between the Toronto real estate market and that of the broader GTA,” added Syrianos.